The many problems, internal and external, that began to affect the proper development of the Easter Parades in the early years of the 20th century, favored, as reflected in its Constitutional Act, and at the initiative of the then Parish Priest of the Church of Our Lady of La Asunción, D. Juan José Marco Banegas, that in 1914 a Permanent Board of Processions be erected (also known over time as the General Committee of Processions, Permanent General Committee of Processions, Board of Processions, General Board of Processions, Local Board of Processions and Board of Passion Processions, which will be renamed definitively in 1958 Board of Passion Brotherhoods of Cieza: "In the Villa de Cieza and sacristy of the Parish of the same, prior summons from the Parish Priest, D. Juan José Marco Banegas, to To deal with the worsening of the Processions of this town, met Mr. Juan José Marco, aforementioned Parish Priest, Mr. Mariano Marín-Blázquez de Castro, Mayor, Mr. Arturo Triguero yes, Big Brother of Soledad; D. Antonio Aguado Moxó, Jesús's Elder Brother; D. Antonio Marín Oliver, Big Brother of the Blessed Sacrament; D. Pascual Piñera, Big Brother of the Call; D. Julián Pérez Cano, on behalf of D. Juan Pérez López, Big Brother of San Juan; Mr. Manuel Buitragos, Verónica's older brother; D. Diego Martínez Pareja, President of the Casino; D. Pedro Pérez Gómez, representing the local press; and D. Manuel Amorós González, representing the Conservative Youth Center of Cieza. Mr. Juan José Marco took the floor to explain the purpose of the meeting, which was none other than to form a permanent Board that would understand and resolve on the improvement and organization of the Processions and all things related to them...”.

However, this is not the first attempt by the Cieza Brotherhoods to coordinate: already in 1797 the Brotherhoods of Jesus and Nuestra Señora de la Soledad agreed that "if some day there were any difficulties for the processions to leave on Good Thursday or Good Friday, to the decision, their members meet with Mr. Cura and proceed according to their resolution”. On the other hand, certain glimpses of corporatism were also frequent during the second half of the 19th century and the beginning of the 20th century among the Brotherhoods of Jesus, Nuestra Señora de la Soledad and the Brotherhood of Santo Cristo when hiring music bands.

Since its constitution, the Board of Passionate Brotherhoods has been the institution that has housed the group of Ciezana Brotherhoods, currently eighteen, constituted in a General Assembly (supreme body of the Board and in which each Brotherhood has a voice and vote, at a rate of one vote for each of them) and represented by a Board of Directors of six members (with voice but no vote, except for the casting vote of the President) whose mission is to coordinate and oversee the organization of Acts and Processions of Holy Week, and to execute the Agreements of the previous one, always joining efforts in pursuit of a common and supportive project.

As the supreme governing body of the Junta de Hermandades Pasionarias, the General Assembly has decision-making power on matters such as the Schedule and Itinerary of all the Processions (both those in which a single Brotherhood participates and those in which several do so), organization and rules to be followed in them, supervision and approval of all patrimonial novelties directly affecting the Processional Parades proposed by the Brotherhoods, application of disciplinary sanctions...

Created to face the socioeconomic and structural problems that in the first decades of the 20th century threatened the continuity of the Processions, in the hard post-war years it had to undertake the difficult task of reorganizing the Passionate Parades with the little patrimony that was preserved, succeeding two decades of consolidation and progressive development of the Brotherhoods and, in addition, of our Holy Week, which then relives moments of splendor and aggrandizement; splendor and aggrandizement that will be multiplied again in the final decades of the century, thanks both to the intensified investments of the Brotherhoods in the conservation and expansion of their private heritage and to the joint actions of the same channeled through the Board of Passionate Brotherhoods .

Thus, in 1970 the Casa de los Santos was built (later several Brotherhoods acquired their own House of Brotherhood), now converted into a House-Museum of Holy Week in Cieza, which houses a significant number of Steps on one of its floors and which the other is used for the Meeting Room, Exhibition Hall, Archives and Secretariat, and dependencies of the different Brotherhoods; and in the following decade the Junta de Hermandades Pasionarias assumes the organization of the Acts in honor of Our Lady the Blessed Virgin of Good Success, Patroness of Cieza, whose Brotherhood and patrimony it took over, as will also happen from 1998 with the Procession of the Blessed Sacrament on Corpus Christi day.

The decade of the eighties will also contemplate the creation and consolidation of the Act of Convocation, Procession of the Banners and Proclamation on the morning of Passion Sunday; and the successive establishment of the Painting and Photography Contests for the election of the Announcing Poster of Holy Week. Likewise, the cycles of conferences and exhibitions related to Holy Week will also begin to become common.

The nineties have witnessed the Declaration of Regional Tourist Interest for our Processional Parades (1993); of the creation (1994) of the Banner of the Junta de Hermandades Pasionarias (embroidered in gold on black velvet by Ms. María Dolores Camacho Lucas) carried by three Nazarenes dressed in the traditional tunics of Cieza (made by Ms. Piedad del Baño Montiel in black velvet with gold decorations and complemented by the typical “executioner” hat) and which, as a breaking group, comes to take the place of a sculptural group projected at the end of the sixties that was never carried out; the recovery of the traditional Tamborada del Viernes de Dolores; of the first editions (1995 and 1999) of the marches and pasodobles typical of Holy Week in Cieza (among them the procession march “Semana Santa Ciezana” and the pasodoble “La Cortesía”, written in 1994 by Maestro José Gómez Villa , composer from Ciez, commissioned by the Board itself); the creation of an Art Commission that advises on any innovations, restorations or modifications that concern the heritage of the Processional Parades in terms of Steps, Equipment and Clothing (1995); to the restoration and representation of the Order of Arrest (1996); and to the successive calls, since 1995, of Drawing and Short Narrative Contests, in addition to the organization of a long series of cults, exhibitions, acts and activities of a cultural and social nature, to which, with their own, they have been adding to in turn the Brotherhoods.

Finally, and as far as the dissemination of our Processions is concerned, the work of the Board of Passion Brotherhoods has focused from its origins on the publication of the Holy Week Magazine, today "El Anda" Magazine. Over the years and as a complement to the Magazine, the Acts and Processions Guide, the Announcement Poster, the Proclamation Poster, the Arrest Poster and the Courtesy Poster have come to light; exceptionally, several promotional videos for Holy Week in Cieza have been made and edited, as well as other specific monographic publications. Finally, since 2003, it has its own website. 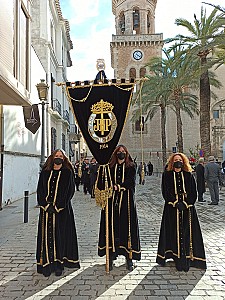