It was the year 1962 when a group of friends who used to meet in the workshop of the local sculptor Manuel Juan Carrillo Marco and among whom were D. Manuel Montoya Nieto, D. Francisco Moreno Piñera and D. David Vidal Cutanda, in addition to the sculptor himself , they promoted the creation of a new Brotherhood for the processions of Cieza; Thus, the Brotherhood of the Descent of Christ arose, whose Board of Directors, once the entry of the Brotherhood in the Board of Passionate Brotherhoods has been accepted, meets for the first time, under the Presidency of D. José Piñera Moreno, on May 24 of 1963 and writes the Statutes that are approved that same year; One year later, the Brotherhood will appoint Mr. Pedro González Díaz-Llanos as President of Honor and Mrs. Amparo Ros Díez as Waitress.

With the intention of carrying out a procession during Holy Week in 1964, that same year of 1963 Manuel Juan Carrillo Marco was entrusted with a sculptural group of six Images: The Descent of Christ, but the group was not carried out due to differences in the project and due to material lack of time for its execution. It is then agreed to carry out a Step of no more than three Images, all agreeing that this was The Kiss of Judas, a Step that Carrillo himself contracted.

El Paso, made up of three figures carved in wood, debuted in Holy Week 1965 parading in the Arrest Procession together with Jesús Nazareno, which entailed some inconveniences and the protest of the Brotherhood of Jesús Nazareno due to the difficulty faced by the anderos of the Kiss of Judas to parade ordinary with such a heavy Step and through narrow streets. In the two following years, 1966 and 1967, and in order to enhance Carrillo's work even more, the Image of the Lord parades in a gold-embroidered purple velvet tunic made in Madrid; However, the Paso fails to penetrate the spirit of the members of the Brotherhood, and so in 1968 a new one was released, inspired by El Prendimiento de Salzillo, carved by the Murcian image maker José Lozano Roca, on a throne made of wood and gilded by Manuel Jaén from Ciez.

That same year, 1968, the peculiar staffs formed by the cross and the ladder were also acquired, which replaced the primitive blue lampshades, and which were made in the Maestro Penalva Workshops, from which the lanterns would also come out in 1970. of the Tercio de Nazarenes, doing it in 1990 from the workshop of his son Diego the insignia holder that accompanies those and in 2004 the staffs of the Infant Tercio, a replica of those of the Tercio de Nazarenes.

The good progress of the Brotherhood motivated that a few years later it commissioned a new Step destined to parade in the Procession of the Risen One: The Appearance of Jesus Christ to Mary Magdalene, which is made by the Murcian sculptor Juan González Moreno and which parades for the first time in 1972, under the presidency of D. Francisco Caballero Morote, who had taken charge of the Brotherhood a year earlier. The Step of "The Apparition", as it is popularly known, was mounted on a wooden throne made by the master carpenter from Ciezano Francisco Dato Moreno, with carvings by the artist from Málaga José Blaya, and painted and gilded in gold leaf, a throne that By Easter 2011, he finished modifying and restoring the tronista from Ciez, Bonifacio Pérez Ballesteros, under the mandate of its current President, Mr. José Antonio Díaz Ruiz.

However, this rate of growth was cut short in the early years of the eighties, to the point of fearing the participation of the Brotherhood in Holy Week in 1983. In 1984 the Brotherhood took a new course. with the recently elected president D. José Antonio López Ramos, under whose mandate the tunics of the Andero Brotherhood are completely renewed and capes are added to the luxury ones, restoring in 1989 the throne of the Arrest at the hands of Antonio Gómez Gómez, master carpenter of Abaran.

In 1993 the Brotherhood will see its old dream come true of acquiring its main Paso, The Descent of Christ, a group of seven Images sculpted by the Murcian image maker García Mengual that will parade that year on the same throne of the Arrest, doing so a year later on a throne metal made by Manuel Caballero, Brother of the Brotherhood.

In 1999, to the script of the Brotherhood made in 1972, and which will be replaced by a new one made by the Sisters of the Brotherhood in 2010, a banner embroidered in gold thread on green velvet by Lorca embroiderer María Miñarro is added. And the following year, restored by Carmen Carrillo, daughter of the sculptor Carrillo, the primitive sculptural group of El Beso de Judas made by him, was recovered, parading in the Procession of the Penitent on Good Friday morning, replacing the Paso de El Prendimiento that He had already been doing it in addition to the Processions of the Arrest and General, Tuesday and Holy Wednesday respectively.

Under the mandate of Mr. Francisco Zamorano Lucas, who replaced Mr. José Antonio López Ramos, who had presided over the Brotherhood for the previous two decades, he changed his characteristic cap for the traditional Ciezano executioner for use by all Thirds in the Holy Burial Procession, in 2010 the Sisters of the Brotherhood made the finery for the throne of Paso The Appearance of Jesus to Mary Magdalene and the Murcian artist living in Madrid Antonio Soriano Talavera carved that same year a set of rod tips in wood for the thrones of the Brotherhood.

Since 2005, the Children's Third of the Brotherhood has its own Paso, La traición de Judas, made up of three images carved by the young sculptor José Antonio Molina from Blanca and which parades on a golden wooden throne, the work of the Alicante artist Domingo García Chauán. 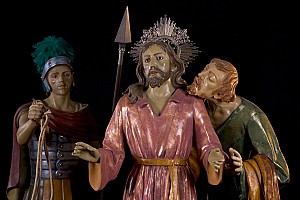