The arrival of the Invocation of Good Success to Cieza is uncertain. It can be associated with the founding of the Hospital de San Pedro by the Hospitaller brothers, an order that has as one of its main devotions to the Virgin of Good Success, venerated in Madrid (near the Puerta del Sol). However, the relationship of this order with the Ciezan devotion is not clear. However, the presence of the image in Cieza and the origin of its public cult we owe to Don Ginés de Mellinas, a devotee of the image and its first steward, who established the cult of the Virgen del Buen Suceso in the recently built Hermitage of Calvario (Actual del Santo Cristo) around 1614. Although there is evidence of a project to erect a sanctuary of its own to the Virgin, it was never built, being called the Hermitage of Calvario under the ownership of the Virgin of Buen Suceso and Santo Cristo indistinctly. In 1680, due to the droughts and epidemics that hit the area, we already have evidence of prayers in which the three main devotions of the town participated: The Patron Saint Bartholomew, the Virgin of Good Success and the Holy Christ of Calvary, which would be renamed for the first time as 'del Consuelo'.

Around 1730 the arrival of the devotion of the Good Success to Cieza had already fallen into oblivion, attributing divine origins and immemorial devotion to the image. In 1744, after the town had been saved from a plague epidemic that devastated the area, merit was attributed to the miraculous intercession of the Virgin, starting a movement of the local clergy, headed by Don José Roldán, Parish Priest of the Assumption, who it would culminate with the naming of the Virgen del Buen Suceso as Patroness of the Villa in 1745. Throughout the 18th century and the first half of the 19th century, the Virgin participated with Saint Bartholomew in different rogations, adding to these in 1800 the image of Saint Christ, who will take the name of Consuelo again. It is, among other causes, the rise of devotion to the Holy Christ that causes devotion to the Patron Saint to decline, even not celebrating its cults in September and participating in the patron saint festivities together with San Bartolomé from the Convent of Las Claras, and this thanks to the particular devotion that Don Pedro Marín, chaplain of the monastery, felt for the Virgin.

In 1936, as a result of the assault on the Hermitage, the original image of the Patron Saint of Cieza disappeared, like so many others, and a large part of its history also fell into oblivion.

In 1942, the 'Commission for the Resurgence of the Worship and Devotion to the Virgin of Good Success' commissioned the image maker Juan González Moreno for 5,000 pesetas, an image with similar characteristics to the one who disappeared in war. The current image of the Blessed Virgin of Good Success would be blessed on August 24, 1942 in the Convent of San Joaquín by the Archpriest of the Assumption Don Antonio Sánchez Oliva. It is a dress image, of academic size, which represents a young Mary, smiling, holding the Divine Child with her left and a goldsmith's scepter on her right.

The image would reside its first months of stay in the town in San Joaquín, being transferred shortly after to the Assumption, returning to the Convent to celebrate its services every two years. In 1954, she would accompany the Holy Christ on the day of the Cross to settle in the Hermitage, the place where the Patron Saint of Cieza was originally worshipped. Definitely, and in order to make both devotions (historically linked) independent, in 1963 the current Sanctuary was built in the Collado de la Atalaya.

It is also in 1954 that she is named as Patron of the Espartera Industry of Cieza, thus making clear the devotion that the town felt for her.

The image would be restored in 1979 by its own author, being intervened again by Doña Carmen Carrillo the following year due to an accident with the candles during the pilgrimage that year. Subsequently, Mr. José Sánchez Lozano also carried out an intervention, being restored in 1997 by Mr. Javier Bernal Casanova. Originally, it paraded on a simple golden wooden throne that presumably belonged to an old image of Saint Joseph from an old chapel located in the area of Los Prados. Since 2005, it has done so in a larger one, the work of Mr. Bonifacio Pérez de Yébenes Ballesteros, to which two cherubs made and donated by Mr. Antonio Jesús Yuste Navarro would later be added.

Currently, as a result of the management of the Board of Brotherhoods, the Blessed Virgin of Good Success is recovering part of the popularity and devotion that it had in the past. Much of this boom is due to the initiative of the Cabildo that led to the image being crowned canonically on September 14, 2014 by Monsignor José Manuel Lorca Planes, Bishop of Cartagena, in a massive celebration in the Plaza de la Esquina of the Convent. 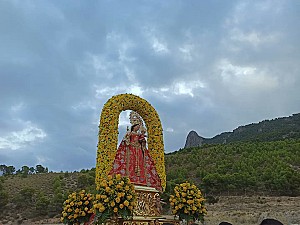 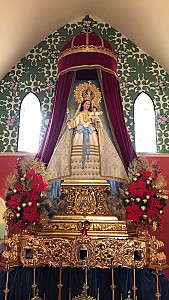 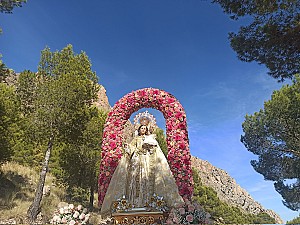 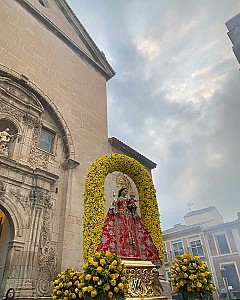 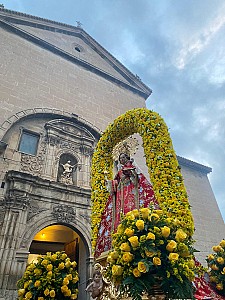 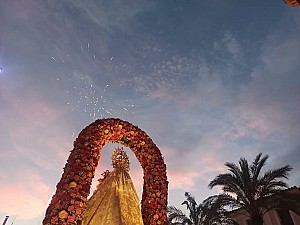 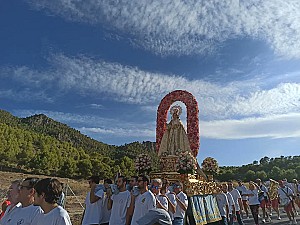 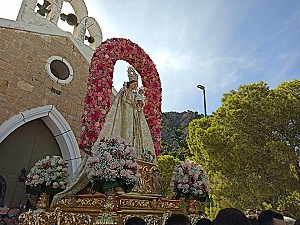 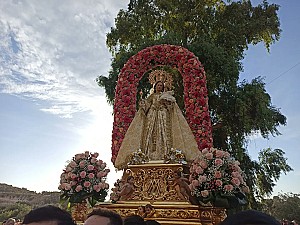 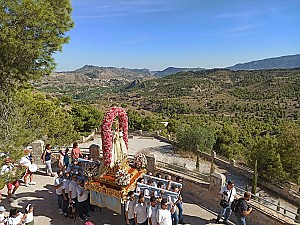